Regardless, everyone knows that it was partnership that was borne from the success of last year’s AsiaPOP Comicon.  The formula: Bring in international celebrities/personalities in order to enrich our pop culture experience.

The caveat of course is that this “enriching experience” would almost always entail an additional expense which eventually presented itself in the form of a 400% increase in one-day ticket prices[i] and a 233% increase for three-day passes.  Other meet-and-greet packages were also announced but their sizable cost would only warrant the attention of the true fans of the celebrity guests.

Now, I am happy for those who can afford to shell out some hard cash to have an audience with our international guests…but what about us who are only really interested in seeing the hobby merchants?  Why make us pay so much more for people or acts that we have no real interest in seeing?

I surmise that the only fair way around this is that if the SMX Convention Center will still be the future home of ToyCon, then the organizers should allot one of the mini-halls on the second floor to the toy and comic merchants. With this concession (and a reduced entrance fee), it would—in my mind—become a more legitimate ToyCon wherein comic/toy enthusiasts and sellers can engaging in shoptalk. No flash. All hobby.  Just the way it should be.

Was it worth it? 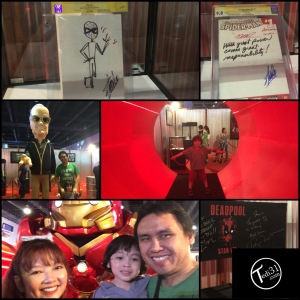 With that issue aside, I’ll now get to the convention proper and attempt to answer that question on everyone’s minds:  “Was it worth it?”

To be honest, I had my reservations coming in (and still do regarding the price).  But in retrospect, I now feel that a very generous P300 would have been more than fair.  My family and I came in on Day 2, past 11:00 am, and a short line later our tickets were bought and we made out way into the convention proper. What was not brought to our attention was that there was a ToyCon 2016 event guide or that they no longer had any copies available. It was just dumb luck that we stumbled upon several copies on the second floor of the SMX Convention Center.

It was also glaring how grossly underutilized Hall’s 2 through 4 were while merchants and convention goers were packed in tight (like sardines) into Hall 1.  That assessment in itself is being kind.

On the other hand, some highlights were the Manananggal Funko Pop display, the larger than life Voltes V exhibit, and Stan Lee’s Excelsior Exhibition.

Lee’s exhibition was made up mostly of a bunch of signed movie props and comics memorabilia.  Stan signature certainly equals a lot of dollar signs. Well, I guess my expectations were a little bit too high.

Those enticing orange and black boxes…

While finding a place to park earlier that morning, we noticed a number of convention goers carrying orange and black boxes that had either the words “Legendary,” “Rare,” and “Common” written on them. Intrigued, we made it a point to search for these elusive boxes once we got into the SMX Convention Center.

However, these magic boxes and their owners seemed to disappear as the day wore on and we were almost resigned that we were never going to find their source until we literally stumbled upon the Manila Major Secret Shop on the second floor SMX Convention Center [Function Room 5 (F5)].

It turned out that the boxes were part of a promo of The Secret Shop: An online store that focuses on the e-Sport market. The boxes—filled with gaming merchandise—came in different quantities with the Legendary box (P3000) and Rare box (P1500) selling out by the time we got to their booth. Only few Common boxes (P1000) remained and any desire that I may have had in getting one quickly dissipated when the clerk behind the counter refused to divulge to us the contents of the box. It was too much of a risk. Like opening a pack of cards hoping for gold and instead getting basura[ii].

The best part of any convention is what you eventually take home with you.  I was able to score a 21-year old cassette tape of the self-titled album of Jars of Clay for only P50 and a ton of comics[iii].

Other notable items that I passed on were a Star Wars Han Solo in Carbonite ice tray (Sweet!) and a Hot Toys’ Mjölnir from Thor: The Dark World.