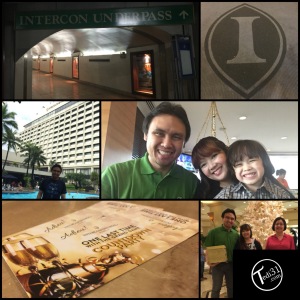 When I first got word that the InterContinental Manila (colloquially known as Intercon) was closing its doors at the end of 2015, my heart literally sank. It was as if I had found out that I was going to lose a distant relative—one with whom I had shared many precious childhood moments with. That was the Intercon for me. I considered her family.

To me, the InterContinental Manila (also referred to as “The Grand Dame”) was more than just a five-star hotel, I always saw it as one of Makati’s emerging centerpieces. I remember seeing old pictures with a newly built Intercon surrounded only by smaller structures and tall grass. A proverbial Ayala Avenue bookend with the Intercon standing on one end and the Makati Medical Center on the other. My family and I had many, many, gatherings there and we would usually end up in the Café Jeepney[i] which had several jeepney’s retrofitted with long tables. Unsupervised, I also recall the many times that I would take one of their elevators to the top floor in order to see the aquarium that they had there.

We went there less frequently as I got older, but Café Jeepney had never lost that place in my heart and always served as my—and my family’s—default birthday breakfast place. It was literally an automatic thought. “After mass, head to Intercon.” Now where will we go for my next birthday?

As our way of saying goodbye, the family booked a New Year’s Eve overnight stay at Intercon (December 31, 2015 – January 1, 2016) and we had the best time. Dinner at The Gambrinus Bar[ii] followed by the countdown party at the Grand Ballroom[iii] and watching the New Year’s fireworks display at the Club InterContinental Lounge on the top floor.

The following morning we had the final breakfast buffet at Café Jeepney. It was a very sad moment. In fact, we were probably one of the last parties to check out of the hotel when they closed their doors for good at noon.

Thank you for all the wonderful memories InterContinental Manila!

[i] For the life of me, my gut keeps on telling me that Café Jeepney went by a different name back in the day. Any leads? I can’t shake the feeling.
[ii] We couldn’t get a reservation at the Café Jeepney as it was packed!
[iii] The event was entitled, “Adieu! Intercontinental Manila: One Last Time with the Grand Dame.”
[iv] It was fitting that I also had a first. To my knowledge, I have never dined in the Café Jeepney wearing slippers.